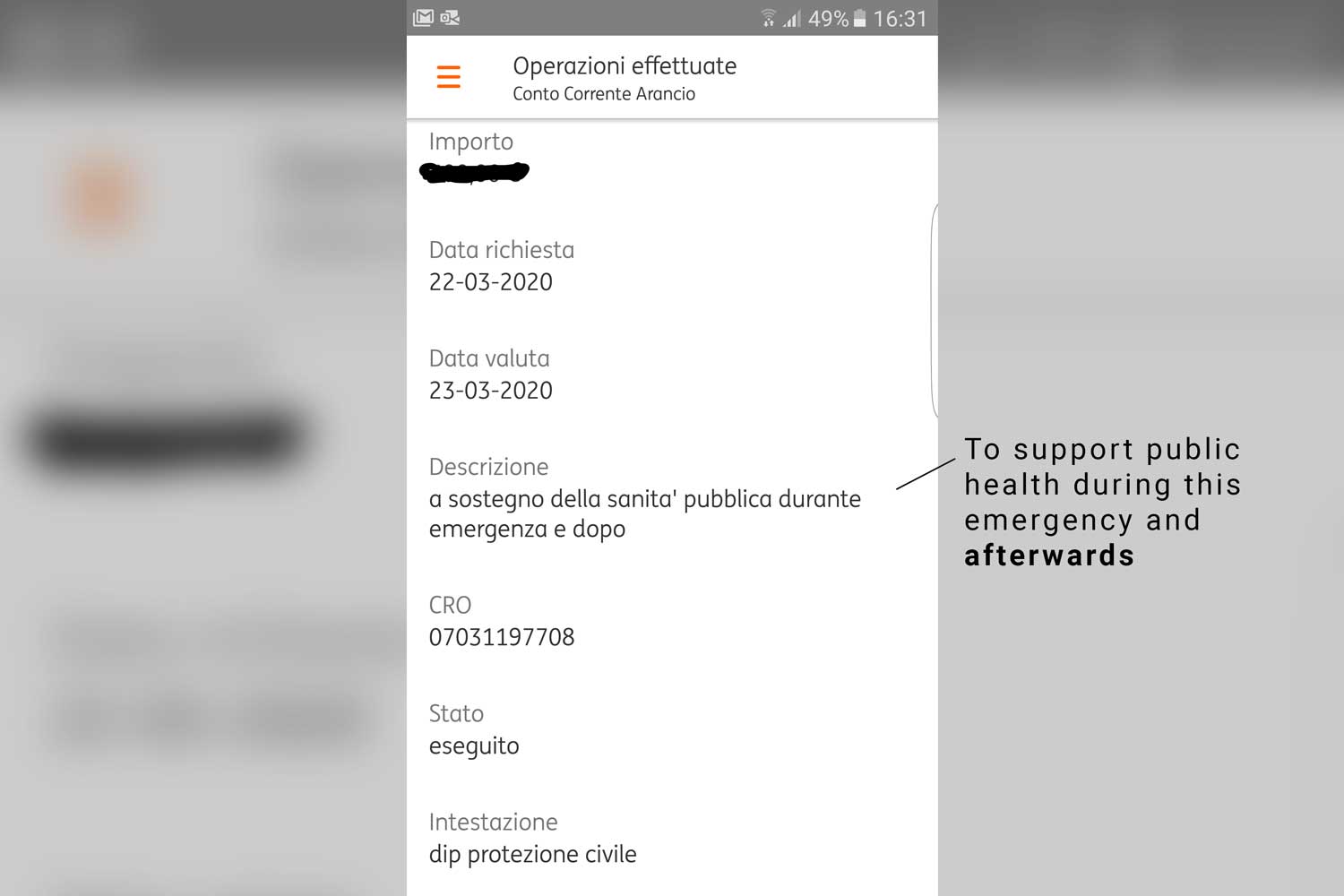 On the 17 of March, the decree law “Cura Italia” issued by the Italian Government authorizes the Department of Civil Protection to open bank accounts dedicated exclusively to the collection and use of donations of funds aimed at dealing with the epidemiological emergency of the COVID-19 virus. Individuals’ donations are deductible from the gross tax for an amount equal to 30% of the donation, provided that the amount does not exceed 30,000 Euro.

In parallel, or in anticipation to this measure, different raising funds activities have taken place all over Italy. Large resonance in the news has been given, for instance, to the campaign promoted by the Ferragni and Fedez influencers couple, who collected 4 millions euros for an hospital to be constructed in Milan and to the millionaire donations of about 10 millions each made by Berlusconi and Caprotti to the initiatives in Lombardy region, related to the coronavirus emergency. Other large donations of 10 millions each by the Agnelli and Ferrero families have been given to a central agency created to combat the emergency. But even small scale donations to local hospitals (ranging from 10 euros to 25 euros) are flourishing all over Italy and through different web-based campaigns.

Although these small-scale donations are portrayed as an example of generosity and social cohesion, I suspect that the mechanism underlying the individual act of donation is often more selfish and, unconsciously, aimed at improving the equipment of the nearby hospital where we all might (hopefully not) end up. But this is not a relevant point here. What matters is that if each Italian person older than 18 would donate 10 euros (i.e. 7 since 3 are tax deductibles), this would amount to 500 millions of euros. And 10 euros correspond to 9-10 coffees at the bar that we could not have over the last 10 days of quarantine. Considering that one bed in intensive care (IC) costs about 100.000 euro, this collective donation could translate in 5,000 IC beds. Since the number of IC beds before the crisis was about 5,000, the collective donation would allow to double the IC provision. Of course, this is a rough estimate that does not take into account the costs of personal and other fixed costs. But it gives an scale of the magnitude that the collective donation might achieve. Moreover, if the 10 individually donated euros were 100 (considering the foregone 100 coffees during a likely quarantine of 100 days), then this would pile up to 5,000 millions (5 billions?) euros. Naturally, the individual 100 euros could go down to 50 or 10 for some groups of the population, while increasing up to 150 and 190 for others. But the key point here is that a donation, even of a small amount, on large scale can make a huge difference.

The question, then,  is whether to donate or not to donate.

I have mixed feelings. On the one hand, with private donations ones fills the gaps of the welfare state and takes up responsibilities that ultimately rest with the government. Private giving ultimately undermines the logic of a collective responsibility to deal with social risks. It departs from the (clearly ideal) contract between citizens and the state built on taxation on the side of the citizens and redistribution and protection from social risks, from the side of the welfare state. The provision of a public good such as health becomes dependent on volatile individual good will.

In sum, private giving to finance the health system is a manifestation of the failure of the welfare state and it could possibly further weaken it. Instead of donating, citizens should better get angry with their ruling class and require more social spending.

The counter argument is that donation is legitimate to tackle natural catastrophes and emergencies like the one we are going through. The priority in such extreme situations is saving as much lives as possible. Donation is legitimate if it can help saving lives. We would later come to terms with our ruling class for past choices on welfare cuts and eventually on the short-sighted managing of the current crisis.

One can still answer back that, even in the case of an emergency, if health provision and its quality depend on private donations, inequalities will emerge. Hospitals in richest and central areas will receive more donations than those in poor or more remote areas. Indeed, this is something that might be happening with most of the billionaire donations being concentrated in Milan and in other large cities.

In favor of private donation, one could still argue that this has also a symbolic value. If millions of citizens are willing to donate and support public health, a clear message is conveyed to the government and parties: “do not cut public health, finance it, support it and we will (might) vote for you”. This is an important message (“we want more welfare state and we are willing to pay for it”, especially for the way we will eventually come out of this crisis and there will be an economy to re-structure, large debt to be repaid and, most importantly, the social life to re-invent.

I suspect a similar enhanced support to schools and research now exists in the public opinion, possibly matched with willingness to pay for them. In these difficult times of homeschooling and hope in a vaccine, many probably fully realize how important teachers and research are.

In conclusion, if I had to donate I would do it through the centralized Department of Public Protection, that can decide where and how to use the money for the best collective interest. With this caveat, the argument of possible raising inequality should be refuted. Besides being useful to support those in danger, 10 foregone coffees can prove to be a very powerful signal for the future direction toward more Welfare State that we might want to take, once this nightmare epidemic is over.